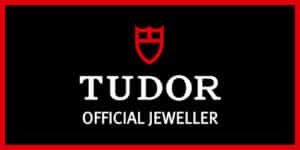 Classic, Mystical, and Alluring – The Three Birthstones of June

Birthstones hold special significance in the hearts of countless people for their natural beauty as well as their invaluable sentimental worth. The month of June is one of two months that has not just two, but three different birthstones associated with it. Accompanied only by those born in December, individuals with June birthdays are fortunate to have multiple choices to represent their birth month.

The three birthstones of June are pearl, moonstone, and Alexandrite. But why these three? You may expect a special story in which these jewels played some sort of historical significance to come together and represent the same month. The real answer is far less sensational but equally as interesting and mostly relates to supply and demand.

‌In this comprehensive guide to June birthstones, discover the drastic differences of the three stones and how they came to collectively represent the sixth month of the year. 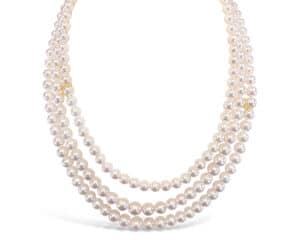 No doubt you have seen or heard of “grandmother’s pearls.” A timeless and romantic classic, pearls have been worn for centuries embodying the elegance and poise of those who wear them. Brinker’s Jeweler’s features a stunning collection of pearls in different types of jewelry in a variety of shapes, sizes and colors. Their Mikimoto collection, for example, has a wide assortment of options. The founder of Mikimoto created the world’s first cultured pearls and strives to keep the traditional beauty of pearls alive while also ensuring the products are modern and exciting.

Mollusks such as mussels, clams, and oysters are raised on pearl farms.  Once they reach a certain point of maturity, the mother of pearl bead nucleus is delicately implanted in each mollusk to start the formation of a pearl. The small fascinating beings are returned to the water and continue to grow.

Even still, not every mollusk ends up producing a high quality pearl or any pearl at all. The look of the pearl may also depend on the type of mollusk it comes from. It can take sorting over 10,000 individual pearls for one sixteen-inch, single-strandpearl necklace. All pearls come from mollusks living in either saltwater or freshwater. ‌

While the timeless pearl necklace remains the most popular way to wear pearls, they are the most versatile of the June birthstones. Beyond the typical jewelry of necklaces, earrings, bracelets, and rings, pearls have been consistently integrated into fashion over the years. While most pearl-studded tops are likely made from imitation pearls, something as elegant as a wedding gown can make a stunning canvas for pearl details.

From the fresh waters of China’s lakes, rivers, and ponds, freshwater cultured pearls can have different pastel colors, sizes, and shapes. They can also closely resemble the Akoya saltwater pearl.‌ 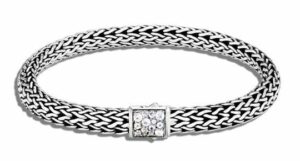 The most enchanting of June’s birthstones is the moonstone. The moonstone is a mystical gem that has evoked powerful feelings of love, luck, and good fortune for centuries. Some also believe it to be a stone of passion and inspiration that can light a motivational flame inside while bringing calm confidence in your next steps.

The most captivating quality of moonstone is its adularescence. Adularescence is the visual effect produced when light passes through the layers of minerals that make up the stone. The gem appears to glisten like the light of the moon reflecting off the water. Adularescence also contributes to the mystical character of the gem as the light rolls across its surface giving the impression of movement from within.

Moonstone is part of the family of feldspar minerals which make up 60% of the earth’s rocky foundation. Moonstones are derived from feldspar minerals found across the globe in places including the United States, India, Brazil, and Madagascar.

The most precious of moonstones come from Sri Lanka. They are high-quality transparent moonstones with a blue shimmering effect. The sources of these particular stones in Sri Lanka have been mined out driving the cost up significantly.

Stones and minerals are universally classified by their hardness on something called the Mohs scale. Feldspar minerals rank at a hardness of 6 on a scale of 10 with diamonds holding that top spot. With a lower hardness, casual bracelets and rings holding a lower quality moonstone may crack more easily with the constant movement of our hands and arms. Pendants and broaches offer a safer environment to protect the integrity of this pretty stone.

A rainbow moonstone bracelet shines with adularescence in this classic collection.

‌The last June birthstone is Alexandrite. First discovered in 1830, Alexandrite’s namesake was the Czar of Russia Alexander II who was assassinated. With such a royal debut, Alexandrite was highly recognized and associated with prestige from the beginning. Even if it were to have been named differently, Alexandritestill possesses its gorgeous, rare, and alluring qualities by nature. The gem holds prestige in and of itself.

Alexandrite is often referred to as “emerald by day” and “ruby by night.” When viewed under different light sources, Alexandrite’s color shifts between green and red, further adding to its distinctive properties. While other gems such as moonstones appear to change depending on light, Alexandrite stands alone as a magic trick of nature. Rays of natural light on Alexandrite produce a green color, and lamplight produces red.

Made up of a mineral called chrysoberyl, Alexandrite is a solid stone ranked at 8.5 on the Mohs hardness scale. Coming in just under the diamond, Alexandrite is strong and durable enough for daily wear. ‌

Alexandrite continues to be popular with brides who desire a unique engagement ring or who have a June birthday. As this trend continues, the cost of Alexandrite increases as it becomes more scarce by the day.

The rarity of Alexandrite actually contributes to the reasoning behind the month of June having three birthstones. In the 1950s, Alexandrite joined the pearl as an alternative birthstone for June. However, the scarcity of Alexandrite makes it expensive and extremely difficult – even impossible – for the average consumer looking to acquire one. Combined with the rarity and high cost of certain pearls, some may argue why it is worth having a birthstone that you can never attain . The good news is with three birthstones options used to celebrate one month, consumers have more options of variety and creativity when selecting their next piece of jewelry. In addition to being a birthstone for June, Alexandrite is also recognized as the gem of the prosperous 55th wedding anniversary.

Because there are three birthstones for June babies, customers and gift-givers have multiple options to represent the month. Some born in June, however, may not be fans of having three different options. It may not feel as special or meaningful without one universally known gem for their birth month. Now that you know the reasoning and characteristics behind the birthstones of June, though, perhaps it is more special and meaningful.

The gifts we receive, particularly jewelry, carry priceless sentimental value. Receiving a pearl for June because of a passion for water and nature can make it all the more thoughtful. Someone who believes in the mysteriously positive healing properties of moonstones would surely appreciate receiving a moonstone rather than a pearl. With the color-changing properties of Alexandrite, it is almost as if a fourth option is available. They say it’s the thought that counts, and it means so much more when the thought behind the gift is so personalized.